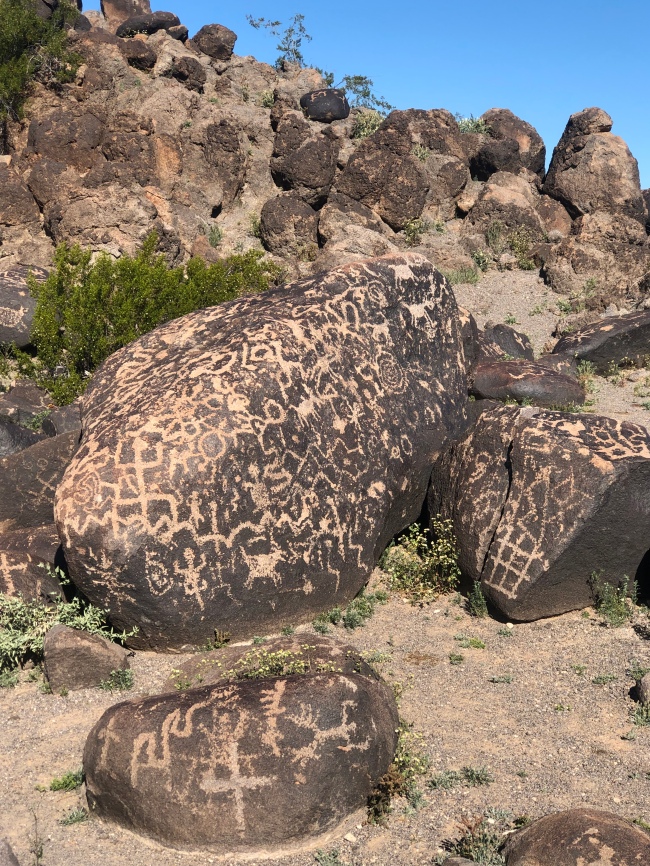 Painted Rocks Petroglyph Site
We will absolutely be the first to admit that we have become weather pansies. Living full-time in our RV has allowed us the luxury of following favorable weather. Thus, we have become cold weather weaklings. Now that we’re clear on that point, you might show us just a touch of sympathy when I tell you that we recently left Tucson because it was going to be too cold. I know, I know. Like our family, friends, and most of the nation, who this season, has endured winter storm after winter storm, you are likely shaking your head with disgust. Long story short, we hooked up the airstream and hit the road toward Yuma, AZ and warmer temperatures. 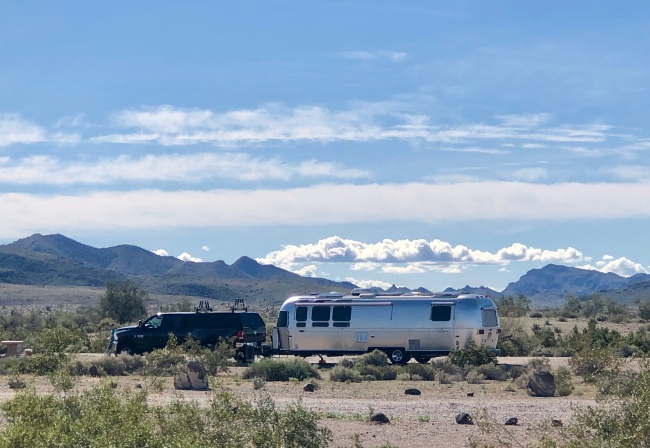 Waiting to leave after Mike got off of work, we drove for two hours and stopped at Painted Rock Petroglyph Site to dry camp for the night. It was a gorgeous spot off of interstate 8, exit 102 near Gila Bend, AZ. Because the campground is nearly 11 miles off the interstate, it is silent and peaceful. Though primitive, the sites were well maintained only cost $8 to overnight, and include a fire ring and picnic table. We arrived just in time to watch the sun sink behind the mountains and streak the sky like a pink, purple, and blue watercolor painting. 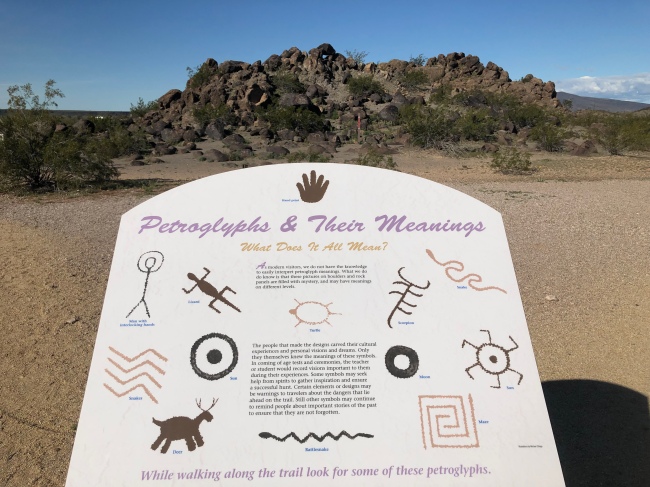 The next morning, we walked the few feet over to the Painted Rocks Petroglyph Site.
Petroglyphs differ from hieroglyphs in that their meaning cannot be directly translated. Today, visitors to this site can view the more than 3,800 designs on 428 boulders. 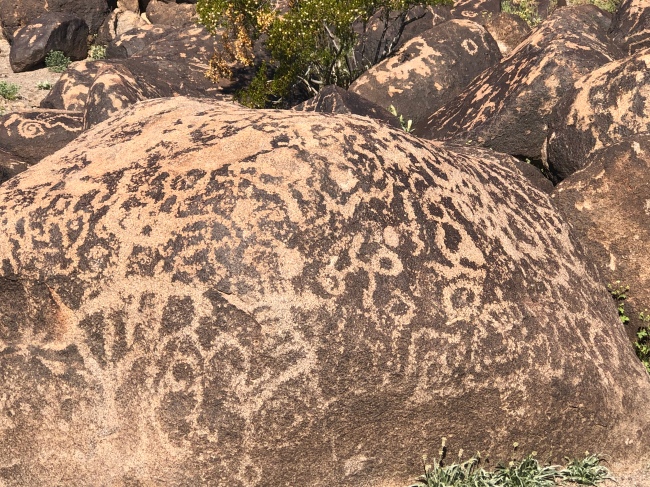 Archeologists use several techniques to estimate how long ago native peoples began etching symbols into these rocks. Along with examining the archeological history of nearby villages, some were as close as two miles away, they also tested the patina on the boulders themselves. The natives discovered that when they scratched away the dark outer surface on these boulders, a much lighter surface was revealed allowing for carvings to be visible. Over time, an oxidizing process known as desert varnish has helped to preserve these ancient markings. It has also provided a measurable path for scientists to date the symbols. 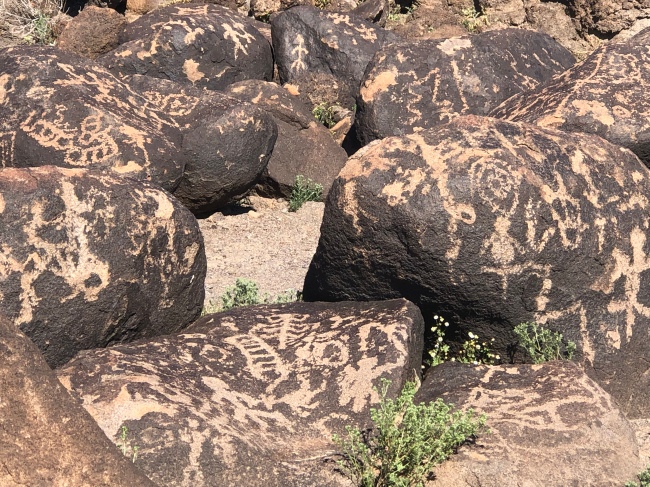 As we followed the circular path leading around the small site, we couldn’t help but contemplate the past life of the area on which we walked. 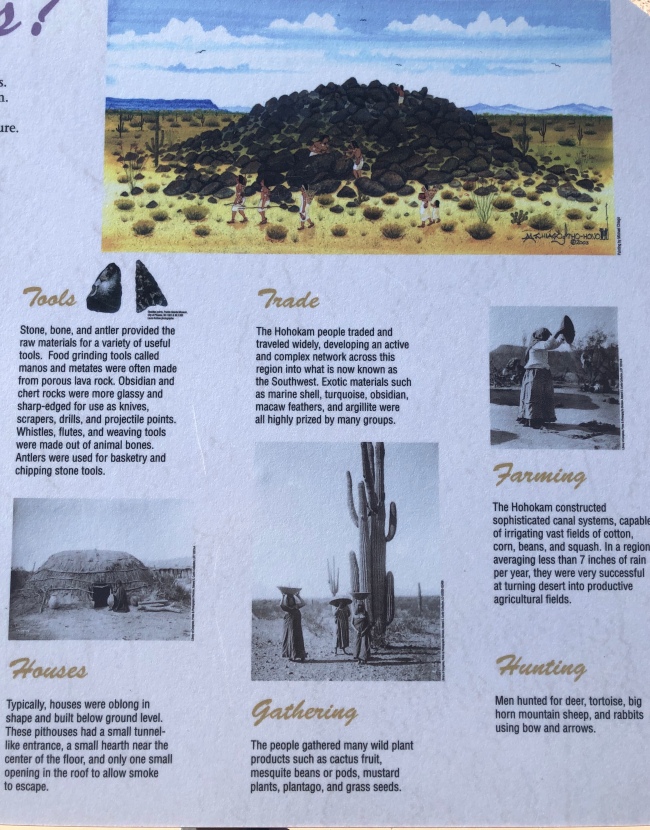 Over 1,000 years ago the landscape along the Gila River would have been a lush environment with many farming communities and animals such as deer, rabbit, mountain sheep, antelope, and rodents. 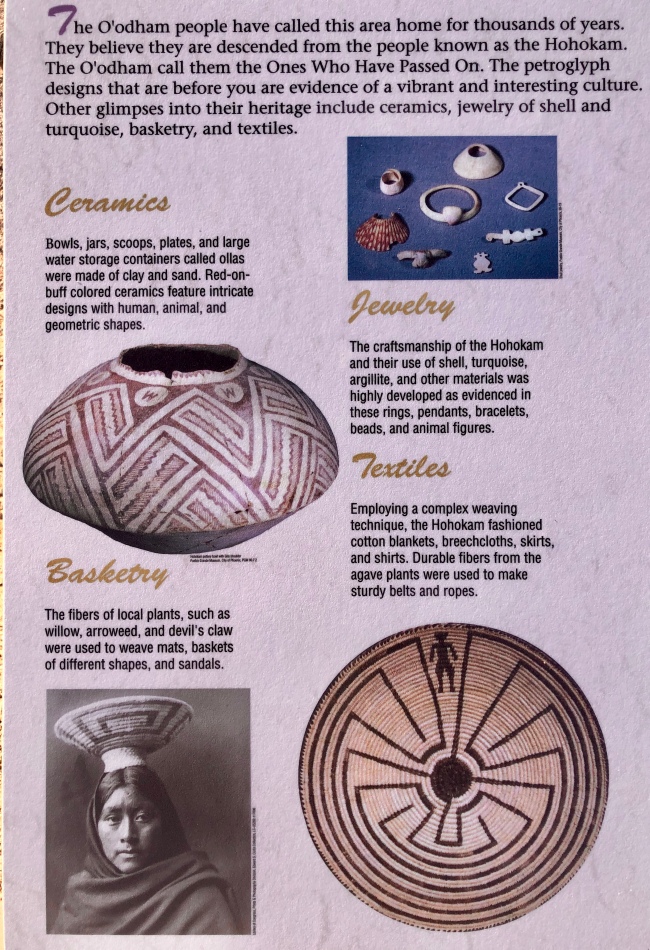 Archeologists and anthropologists suggest that the many native people passed by this area on their way to other communities. They would leave symbolic messages to the Gods and possibly for each other. See if you can locate some of the grid-shaped carvings. 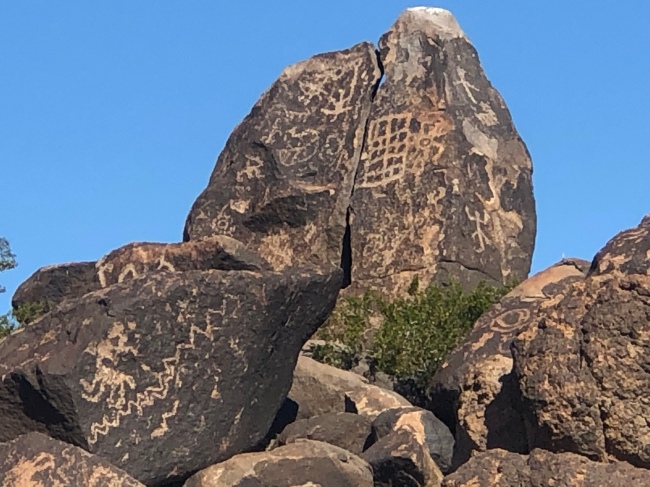 Archeologists believe that those may have been maps of the farmland of the area, depicting who owned what plot. Visiting ancient sites like this one is one of my favorite things to do. Life on the road has allowed us the opportunity to visit remote sites like this one that we otherwise would not have gone out of our way to investigate. The more we learn about ancient Native American cultures, the more I find myself awestruck by their understanding of the delicate nature of human existence on this planet. A simple but disciplined practice of only using what they needed and treating the planet with respect. Oh, how our disposable, wasteful, selfish, modern culture desperately needs to take some serious notes from their lessons.

Blog at WordPress.com. | The Designfolio Theme by Press Coders